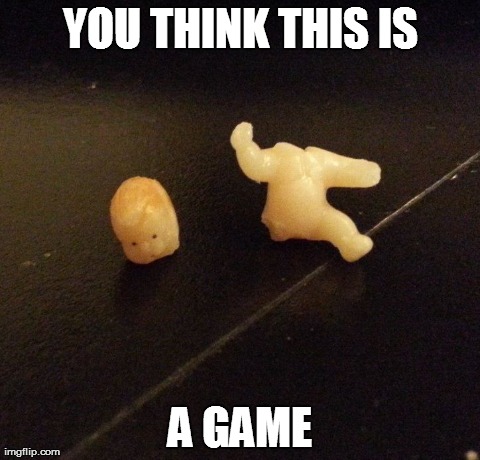 There’s some secular-religious discussion here, so if it bothers you or clashes with your personal image of me, you can sit on it and spin.

I’m not Catholic, but I observe Lent. I don’t believe you have to be particularly religious to appreciate parables and mythologies woven into the fabric of mainstream religions, and the ritual aspects of Catholicism are appealing, and it’s not like I’m cutting in line for Communion.

When I was younger, and we attended Catholic schools, we used to give up things for the duration of Lent and “struggle” with our choices as we pretended to identify giving up chocolate and soda with actual fasting in a desert for 40 days. Some of my more intrepid friends would give up television or the phone and it was always best to avoid them after Week Two, as the stress of the pop culture void and lack of social interaction began to wear.

It was silly, but we were kids and these little sacrifices meant the world to us, so much that when we cheated and had a piece of chocolate, we felt to compelled to hit the priest up for Confession.

Now that I’m older, I can actually appreciate the lead up to Easter – a way to shed old habits and prepare for a new way of doing things. I don’t give up stuff, like social media or antagonizing the neighbors, because I’m not crazy about giving up something just to go back to it later.

Last year, my challenge was to make a bento every day for 40 days – the days that I went to the office, anyway, because I wanted to start a habit I could live with. I went the full 33 days and made 33 bentos with lots of great food and a habit I enjoy. The plastic babies made it fun because over Lent they become Plastic Baby Jesii – for that added touch of blasphemy – and their number increased by one every bento.

As I’m already into Day 45 of my #100Days challenge, I’m already making a bento every day, but as the PBJ are a favorite, starting today, they are back in the bento pics through Easter. Also, since the bento isn’t a habit-building part of this year’s Lent, to my new habit-build will be to write 1,000 every day. Blog posts will not count, rambling Facebook comments will not count, but anything directed towards a new or existing project will be fair game. That makes the target 40,000 words. I’m using the meter from Writertopia in the meantime, but I am on the lookout for something just as darling but less potato-shaped.

This build is not only doable but I should be doing it anyway.

It’s a shame I don’t do things big.

Yesterday was 40 minutes of weight training and 13 minutes (10 minutes run with 3 minute cool down) on the Treadmill. There are no pics of the gym equipment because no one wants to see sweaty butt-leavings.

I said NO ONE.

Giving up anything special or taking on a challenge?