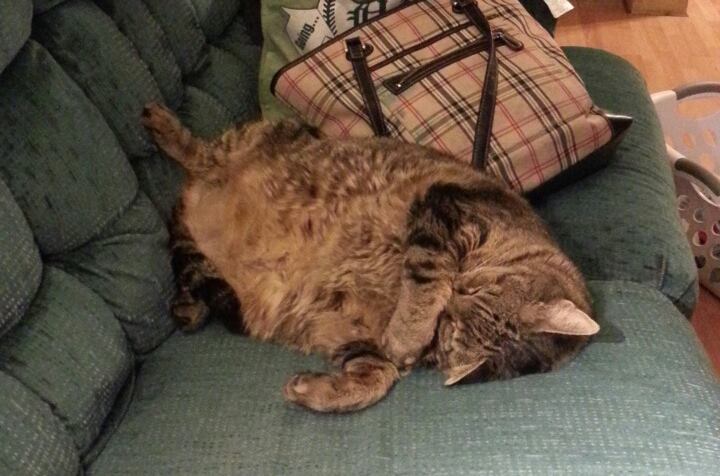 When I tell people my cat is lying in state in the living room, I get weird looks. Loki was a large cat, likely with Mackerel Tabby and Maine Coon in him. At his largest he was 22 pounds but with a firm hand and a reduction of treats we got him to a more manageable 18 pounds. Up until 2 years ago, he was housemates with Zeus, who lived to a ripe old age of at least 23 before succumbing to cancer. Before Loki, Zeus was housemates with Toby, who at the age of 9 developed an idiopathic condition that caused his chest cavity to fill with fluid. Toby and Zues, Zues and Loki, Loki and Pumpkin, a rescue we adopted about two years ago. We have always been a two cat household. They’re our family.

When Toby died, we brought him home to be buried, because we couldn’t afford individual cremation. The vet bills alone put us into debt. While I waited for the local Miss Dig service to mark off the utilities so I wouldn’t electrocute myself or blow up the neighborhood hitting a gas line, we held a wake. People, friends, family, neighbors, stopped by and paid their condolences. By the third day the hole was prepared and I buried him 4.5 feet down, per local ordinances. He’s still there.

When Zeus died two years ago, we were in a better financial position, and we‘d made the decision to not spend money prolonging his already full life by expensive means. We look at the options and decided on a basic urn, knowing we could always upgrade later. The 10 minutes we were allowed in the vet to say our goodbyes after his final shot were all we got. There was no funeral or wake for Zeus. For days we thought we could hear his nails clicking across the floor or feel him pulling himself onto the bed. It was hard.

A few days later, we picked up his cremains and put them on the shelf. We lit candles and cried. He was home.

Loki’s turn had come too soon, and very fast. We knew he had liver failure, and he was down to 8 lbs. He was weak and unsteady. The vet gave us steroids for him, and we knew that our time together would be wrapping in days, not months. It was about a week and change. We made the appointment, went back and forth on whether or not to extend it. He could get better, was the hope. The night before, I even bought food to last another week and a half, because at heart I’m an optimist, and I wasn’t ready.

During that final week on a mild for January night, on one of his last really good days, D took Loki outside on a short walk around the building. Loki was a good cat like that and he knew where all the rats were. Loki made his way to the dumpster and just sat. Very shortly a rat came out and with four feet between them, they stared at each other, two worthy foes, meeting for the last time. Then the rat left, and Loki came inside.

I spent all weekend with Loki. He lay in my lap, got everything he wanted – all he pets, rubs and scritches. All the treats and food. I cried a lot.

Monday was hard. I knew when I left, I would be coming back to a home with one less cat, a cat that had been my buddy for 14 years. As I stood there and sobbed once more before heading off to work, I looked down to see him, and he was looking up at me as if to say, I’m right here, mama. I’m not gone yet. Many more kisses and scritches before I left.

I took the long way into work.

I could have made a call of reprieve, but for him to suffer a few more days while I waited for convenient time off seemed unusually cruel. His body was shutting down. As if summoned by Cat Deities, friends stopped by and gave D a ride to the vet, just a few blocks down. It happened without me, but it was for the best. The last few hours at work were hard. I just concentrated on the road and knew I could fall apart when I got home, instead of on the highway where people could die.

I came home to a sad, but lovely surprise. D had asked the right questions at the vet and filled out the right paperwork. He met me in the driveway and we walked inside together.

Loki was in his favorite spot under the window, in the cat tree/bookcase we built for him. His treats, a candle and a Coke bottle we had made just for him were on the window sill. He looked like he was waiting for me to come home. D did a great job. Loki looked great. KABL played quietly in the background. D said it was Loki’s favorite station.

We raised our glasses toasted Loki and cried. He lay between us in his tree while we sat at our desks and worked and talked and cried some more. This seems morbid and macabre, but it was very comforting. I could reach over and pet his feet, and feel his soft fur like I always did when he hopped up. I could give him scritches and kiss his forehead, something he barely tolerated. We would lean over periodically and whisper secrets to him. Loki was very good about secrets.

Hey, did you know you’re the best cat in the world?

You’ll always be my battle cat.

No different really than a wake in a funeral home. People are funny about death. They find it gross and uncomfortable, can’t believe anyone would touch a dead body, as if death was a contagious condition.

I hate to break it to them – we all have death, and in the end it will kill us. That shouldn’t stop us from expressing emptions and affections one last time before the final goodbye. Not for everyone, no, but being so far removed from death as we are in modern society, it’s no wonder it makes people uncomfortable just mentioning it.

The reality is petting a dead cat reminds you there’s a dead cat in there, so concerns that we’re deluding ourselves into believing he’s still alive are ridiculously invalid. His fur is soft but his body is cold. His tail is fluffy, but his limbs don’t move. Rigor sets in about an hour after death depending on conditions and lasts about 12 hours in cats, so it’s not like we were cuddling him. Like Gramma at the funeral home, Loki is never going to watch movies with me again, or paw at my feet for stray bits of chicken or wait on the bed with me for Sunday morning breakfast. Unlike Gramma, I don’t have to reach far to pet him and say all of the things I need to get off my chest about my cat. He’s right there.

Wakes aren’t for everyone, obviously. People don’t like grieving in public and they don’t want to feel as if they’re burdening others with their sadness. You know what. I’m sad. I’m going to be sad for a long while. I won’t “burden” you with my sadness, but I sure as heck am not going to pretend to be happy, either.  Dealing with me is dealing with my grief. He wasn’t just a cat to us. He was our Loki and this is how we’re saying goodbye.

Tomorrow afternoon, Loki will take his final car ride to Faithful Companion to be cremated. Depending on their schedule, maybe we’ll stay, but likely we’ll pick him up the next day and he’ll join Zeus on the shelf to be with us always.

Maybe other people think pets are disposable creatures, barely worth feeding or providing shelter for, but my pets are my family. They’re little men with big personalities. They talk to us and play with us and remind us that we are more than single entities working to paying bills, put up with stupid people and then dying. We often don’t understand each other, but they are sentient creatures who deserve as much love and respect as we would give any one that meant the world to us. Any time you are greeted by a furry family member, you are reminded that you’ve been entrusted to keep that life safe and happy and it’s your duty to fulfil more than their basic needs. You have to love them, and they give more than that back.

That’s why we had a wake for Loki, and when the time comes for all of our cats, if possible, we’ll have wakes for them too. We need this time to say goodbye to our loved ones, with final rubs and final whispers. We will always have more to say, and while we think we have their whole live to say it, those final quiet moments are sometimes the most precious.

3 thoughts on “We’re Holding A Wake For The Cat”