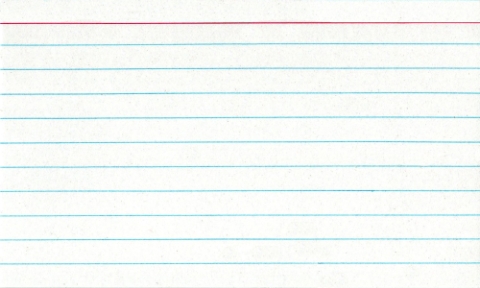 We all want to have New Year’s resolutions that have meaning and impact and we hope when we look back on them a year later we’re not deeply embarrassed.

For the record I always am.

Every year I want to wrap up the novels I have in progress and get them edited and submitted, and before too long it’s March, then June and I have other commitments and then it’s September and then the holidays and when I finally take a breath, it’s January again, and nothing has been accomplished.

So again I tell myself, I am going to finish something this year, more than the three or four stories I get published in various respected venues.

A few nights ago, I made the pointed decision to not sit on the couch and ignore football while I scrolled through the same useless memes on Facebook. Instead I went to the bedroom (the apartment is only but so big), pulled out the bed tray, and gathered all the materials my high school English teacher said I’d need to write a term paper – a pen, a notecard box, and index cards. Earplugs inserted to drown out sports sounds, I set to actually outline one of my languishing WIP.

Some authors don’t work with an outline, believing it stifles creativity. Personally, I need to see where I’m going. Give me a destination and a few identifying landmarks, and I’ll get there. With the WIPs I’ve had in my back pocket for an embarrassing long time, I didn’t know where I was going. I have strong starts and some fantastic middles, but as far as ends – I suppose I figured they would come to me in some great revelation. It’s been a few years and none of those revelations have presented themselves and the background processes aren’t even running anymore.

So, I crawled into bed and got comfortable. I counted out 50 notecards. I made sure all of my pens had ink. I did something I really hadn’t done in years.

I brainstormed. I wanted to start with my novel Never, since it’s making the most noise in my head lately. Every idea that popped into my head, never mind the feasibility, got its own card.

First I did character cards – name across the top, four quadrants of Background, Motive, Faults, and Goals (or something similar, I don’t remember specifics offhand, I wasn’t really going for uniformity). I needed to reacquaint myself with the people I gave birth to. I discovered much to my horror that for all of my fascinating main characters’ traits in all of my fantastic stories, I didn’t have a single driven motive for any of them. I have this great character, Penda in The Cat Dragged Inn. She has a life, a history, and a purpose. I stuck her behind a bar and gave her nothing to do, because I suck. My Main Character was a ghost in her own novel.

The same with Never. Broken main character, does absolutely nothing.

After my character cards, which I would (and will continue to) write as the characters come to me, I put one thought about the WIP on each notecard, and no more than a sentence. These ideas may or may nor work – when you brainstorm, practicality doesn’t matter – and in about an hour, I had over 50 notecards of ideas alone: things that my characters were doing, things that were happening to them, settings, places.

You know what I discovered?

My Main Character wasn’t my main character anymore. She had nothing to do because the story wasn’t about her. I focused on the action with other characters, the dynamic make things happen characters. Never took on new life and better still, I can use the existing framework. The person I thought was my Main Character drifted to secondary plot point – and was happy there.

I could stop shoehorning her into the role of MC because it’s not where she wanted to be. She lacked substance, she was boring. She let things happen around her and she reacted.

I sorted my notecards into a basic timeline and found very few ideas didn’t work at all. They’ve been set aside, for now. There is still life in them, just not right now.

These other cards – now we’ve got a story. A relief, actually. I have something I can work with. Never is shaping up to be a very dark story in a tangential universe of a familiar tale. Some people won’t like it, but I don’t think I can worry about those people. I want to find a few hours every evening to do the same with the other two novels – jusy sit in a quiet room, pull out my notecards, and scribble lives and adventures and mayhem.

That makes my the resolution for the first quarter of 2016 to conquer the fear of completion. I am actively removing the roadblocks that exist only in my head to get these stories finished. I don’t have a deadline to have them completed because I need to conquer one hill at a time. This month’s hill to climb is progress and completion.