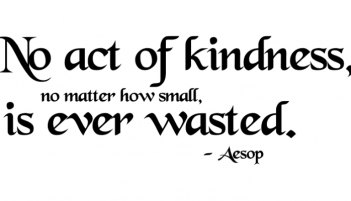 I didn’t do it thinking I could have been elsewhere or how much time I was spending, in fact time became irrelevant. I did it because if it was me, if I was disabled and disconnected, I would want someone who could assist without complaining, without reminding me how grateful I should have been, without making me feel like a burden.

My neighbor was relocated briedly while her apartment was renovated. Her cable, her phones, and all of the wires were disconnected while a new floor was put down and the walls painted. When she and her son were moved back in, they were left on their own to reconnect everything. She’s older and disabled and her son is dependent on her. He’s able bodied, but very dependent. They needed help and family was unwilling to assist. They are shut ins. They have people come in to clean and do laundry.

I was about to go on a run, my first in a week. I was finally feeling better, the weather was warm and I had new shoes to break in. Her son poked his head out as I was about to leave and asked if I could help. I was irritated (I am that person, after all) but I agreed to take a peek. How long could it take?

It took 5 hours, and that was just yesterday. The cables were connected, but in a confused snarl, the wires were doubling back, nothing was getting a signal. I untangled and tried several ways to connect. I managed to get one of their two TVs connected, but not her landline. She’s on Life Alert and needs that line. 2 of those hours were on an ancient simple cellphone with no volume control with the Internet company. Several techs later they insisted the boxes were bad and the phone was likely fried from the recent power outage. They would send a tech out to swap out the boxes (an expense she couldn’t afford) but it would take a week to get there. She would have to buy a new phone. More money.

I admitted defeat after those 5 hours, but promised to pick up a new phone for her and return after work to see if I could get it working. I hated that he would be without TV for a week. I made her swear she wouldn’t fall before I returned the next evening. I left feeling tired, discouraged and defeated.

I went back after work today. I picked up a new phone for her and set about getting it connected. I still couldn’t get the phone working. If she’d fallen, or her son needed help, they wouldn’t be able to do anything but knock on my door, and he is very shy. I pulled up the cable company chat on my phone and asked a question I probably should have asked yesterday.

“Neither,” she said. “There should be a splitter run from the outlet.”

Lord, bless me. I’d assumed it was the one thing connected correctly. If this were a movie, it would be the obvious thing the audience complained about.

I undid absolutely everything, re-ran it all from the splitter connected to the outlet.

The phone received a signal. I figured out the Life Alert set up and tested it. The cable boxes were grabbing a signal. She could watch her basketball, and he could be in the other room and watch Syfy. They were safe.

I’d finally asked the right question. I was wrapped up inside of an hour (on top of the hour spent reworking the problem). They were grateful and I accepted their thanks graciously, but refused any money. I was more embarassed it took as long as it did, and that was my failing, not theirs. I offered to take back the phone to get her $20.00 back, but she liked the new shiny blue handset.

She said there was a blessing with my name on it.

I will never turn down a sincere blessing. I was kind and it really cost me nothing. I can spend 7 hours watching bad movies and eating cookies. These hours were better spent.

One day, our Gods willing, we’ll be older, but maybe isolated and afraid. It happens. May we always have someone willing to lend a hand.