Back in 2005, I was a unpublished writer scouring listings for places to submit. I’d been actively submitting my short stories to all sorts of markets, mostly magazines I knew or had heard good things about. In a desperate reach I punched into Google “horror submissions short story”and lo and behold saw a call for submissions to a comic anthology looking for short stories. That’s how I met Carlos Samudio of Hopper Comics

I submitted a piece of flash fiction written as sort of a Dear John Letter called “I Do This Because I Love You”, about a man who realizes his dream of resurrecting the love of his life, only to be faced with actually having to deal with the resurrection of the love of his life. It took less than a week for Carlos to get back with me with the acceptance, and in a move that would forever spoil me, we spoke on the phone about the layout.

Hopper Comics published Bound #1 in January 2006 and it was the push I needed to see print in almost every pub I subbed.

Time passed and other opportunities for projects came and went, as well as the possibility of a relaunch of Bound (called Re-Bound, natch) under the glorious banner of Black Frog Studios. Carlos has been busy with Looknow Productions filming shorts and features and I knew eventually when time allowed we’d get back to Rebound.

I got a call a few days ago from Carlos regarding that very project and I’m still processing that 30 minute call.

I Do This Because I Love You begins production as a short film Summer 2013 in New Orleans, LA with casting to get underway later this year. I cannot begin to describe to you the emotions churning inside of me.

Did I mention he’s tapped me as the director?

There, now I have.

You can no longer buy issues of Bound #1, as it sold out long ago (and if you have a copy or two or three – you’re dang lucky), but stay tuned for information on the relaunch and future casting information. 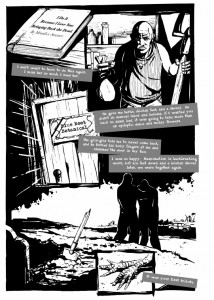 8 thoughts on “And Then The Chicken Feet Aligned (Like Stars, But With Jam)”