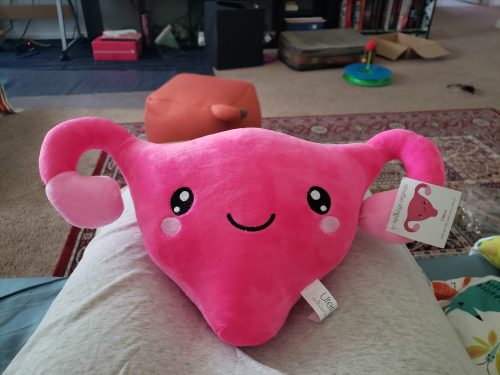 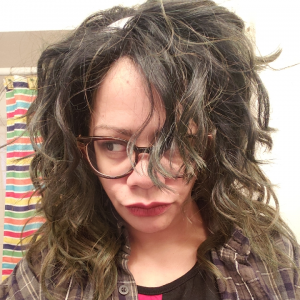 Overall, it’s a good age to be. I’m mostly taken seriously, people have long given up on telling me how to dress or wear my hair, and they’ve stopped assuming I’m going through a phase. With being 46, comes some weight gain, a lifestyle shift to a more sedentary pace. I’m tall, curvy, and mostly happy with how I look.

About 2 years ago, things stopped fitting, and I mean everything. I was coming off a bad Achilles injury that all but halted my running regimen. Getting back into the swing of things was easy enough but I wasn’t losing weight like I used to. In fact, I was slimming everywhere except for my belly. None of my corsets fit – yes, my dozen or so $300 corsets. Clothes looked awful on me. Nothing hung on me that didn’t accentuate the belly I couldn’t seem to lose. Running was even problematic because I couldn’t go distances without feeling wiped out or worse, needing to pee every quarter mile, which really affects your pace. I invested in more (cheap) corsets and shapewear and began a subtle shift to bulky t-shirts and sweaters.  Didn’t stop me from buying cute clothes, but it did stop me from wearing them – I looked ridiculous.

My former doctors just diagnosed me as being overweight with a high BMI and told me to stop eating, smoking, and being fat. I was concerned that maybe it was visceral fat since I do have heart disease, but “nah,” said the old doctors, “you’re just chubby and could stand to eat more salad.” Fine. I did exactly that, more salad, found a trainer, did more exercise, added weights – but the belly never went away. My doctor thought I probably wasn’t being truthful about the exercise and diet so I did what I should have done several months prior – I changed doctors. 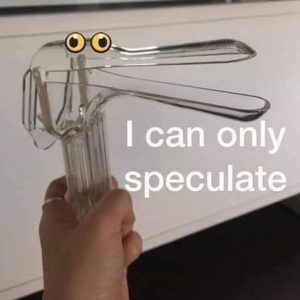 New doctor figured I might be entering a phase of menopause, changed some of my medications and did something Old Doctor hadn’t bothered with in years – an actual physical that went beyond bloodwork and a lecture.

The first time she laid hands on me she felt it. It took all of a minute. Right beneath my ribcage. She said, “you’ve got something in there.”

“It isn’t visceral fat?” I asked. She told me that type of fat would feel watery and loose. What she felt was unyielding and bulky and she scheduled an ultrasound.  It confirmed what she already suspected and set me up with a wonderful GYN who would handle the rest.

I wasn’t fat. My last two physicals didn’t have pelvic exams, and this could have been caught so much sooner. My menopausal symptoms – excessive sweating, heavy bleeding, longer periods, clotting – were due to a non-cancerous tumor, a fibroid, grown by my very own reproductive system and thriving happily in the crawlspace between my uterus and bladder.

I named it Bill. We suspect Bill had been around in his present form for at least 2 years, but as fibroids go, cultivating much longer. Things moved quickly after that. Ultrasound, renal x-rays, blood tests, I had a date for surgery within three months of initial diagnosis, 2 months of scans and test, less than 4 weeks between gyne appointment and operating table. Bill had to go, and sooner needed to happen yesterday.

To give you an idea of scope, here is me the night before my surgery. I’m not puffing out my pouch and had I tried to suck it in it wouldn’t have made much difference.

For the last year, I’ve been using shapewear and corsets to hide what I thought was just me tubbing out with very little success. I couldn’t even look cute. I hated the gym because my clothes wouldn’t stay in place and staying hydrated meant taking bathroom breaks a lot. I was presenting at 24 weeks, meaning, as you can see, I look 6 months pregnant. I got asked if I was. Many times.

On July 16, at 8:30 am, I went under for a Total Abdominal Hysterectomy with Bilateral Salpingo-Oophorectomy (TAH-BS). That means uterus, cervix, and fallopian tubes hit the bin. I’m keeping my ovaries for the free estrogen. 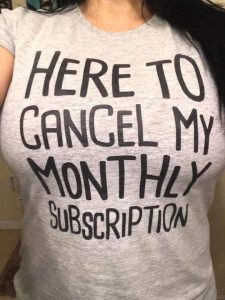 You know that scene in every movie and TV show with a hospital surgery ever where they have the patient count back from 100? I don’t remember that. I do remember getting wheeled down the hall and into the OR. I remember how bright it was and all of the equipment. I remember the masks and floating smiling eyes. I then remember waking up, being wheeled into my room, and then being poked and bled every 6 hours.

A 5.5” vertical incision was made beneath my naval, and for 3.5 hours, they wrestled with Bill and my bulky uterus. For surgery that usually takes 90 minutes, there was a lot of swearing. One of my surgeons recounted the surgery to me later as if it was the most exhilarating fight of her life. Give me a surgeon that tackles a challenge head-on with fire in her eyes!

I had setbacks. My hemoglobin dropped from 11+ on Tag/Type day Saturday, to 8+ before surgery, to 6+ after surgery. That’s a measure of the white blood cells in your blood and the lower the number the harder your heart has to work to move that empty blood to your organs. My blood was pumping but my organs were starving. I needed a transfusion (2 units) that day. That story of my transfusion saga is one for another day.

I got my transfusion and stayed overnight, then I spiked a fever and stayed another night, and then they held me just to make sure I wasn’t going to die. I was on a liquid diet the first two days, then a regular diet, which frankly isn’t much better.

I passed my time by sleeping or scrolling through the endless hospital channels. I got asked a lot by nurses if I’d passed gas, which is important because when they play in your insides, they manipulate your bowels, and passing gas is a sign that everything is okay. For the first few days, I had nothing. No food meant no gas. Then on Thursday the gas hit, and hard. First, the pain as it moved through my system, then the smell as it silently exited. I knew it was bad when my roommate’s family kept asking from behind the curtains, “what’s that smell?”

I wanted to crawl out the window.

I felt well enough to change out of my hospital gown and into my pajamas on Thursday (Day 3). Brushing my teeth was a religious experience. I washed, sort of, and took my little walks to the memorial garden near my room. I had a roommate who needed a sitter, so I was grateful I’d brought earplugs and an eye mask. She was mostly active at night and being hard of hearing her sitter asked her questions at a level reserved for rounding up children at a playground.

I was discharged on Friday, July 19, smelly and sore, but grateful.

I’ve been home three weeks now, and it took some getting used to since my home bed doesn’t adjust like a hospital bed. D has been wonderful, keeping me fed, clean, and comfortable. It’s not easy being a full-time caretaker, but he has done an amazing job.

I have a nest on the couch made from a tv pillow, a beanbag chair and whatever other pillows are handy. I sleep with six pillows, elevating my knees since sleeping on my back in my only option right now. I shuffle when I walk, I get up slowly and sit even slower. It hurts when I sneeze and coughing feels like I’m being murdered. I am sore and achy, but I no longer have a parasite living in my body, so I’ll take the tradeoff. The pain will pass.

I have had lovely out of town company stop by and connect me with the outside world, helping with shopping and the often interminable feeling of isolation. I have daily walks of up to a km. I have stopped taking the Norco and stick to Mortin when I overdo it – and I overdo it more than I should. I wear an abdominal binder about 12 hours a day and I carry a squishy plush dog or clownfish with me over my belly. Crow is never far from my side.

I am 6 months to a year from running, again. I miss it, but I won’t jeopardize my health by jiggling my insides. I’ve just had major organs removed. It will take time for what remains to resettle and acclimate to the roomier digs.

Thank you to everyone who has checked in on me and D. I am recovering and taking it as easy as my nature will allow. This was my first surgery, and it was a doozy.

Oh – Bill? Well, Bill was taken to Pathology who determined he wasn’t full of teeth and hair and malignancies. Bill was 20cm x 20cm x 11 cm (in inches, that’s 10″x10″x9″ – the size of an actual infant). He weighed 4.5lbs. Bill was sent to the bio bin and incinerated. Goodbye Bill.

Finally – women’s health around the world is often considered an afterthought. Women’s pain and medical needs are aligned with men’s and consequently, we’re often dismissed. I thought I had great doctors (men and women in the same practice), I had them for 20 years, but as my body got older and my complaints and concerns mounted, in their eyes, I became a hysterical whiner who was dismissed. I was growing a tumor but was told I was fat. Never let your concerns be dismissed.

Because some of you are too polite to ask but you really want to, I’ve saved you the trouble and embarrassment, and hidden Bill behind this link. It’s graphic and it’s a little grotesque and not for everyone. Click on it at your own risk. Please don’t be a dick and share the image without permission. I shouldn’t have to say it, but some of you are assholes.