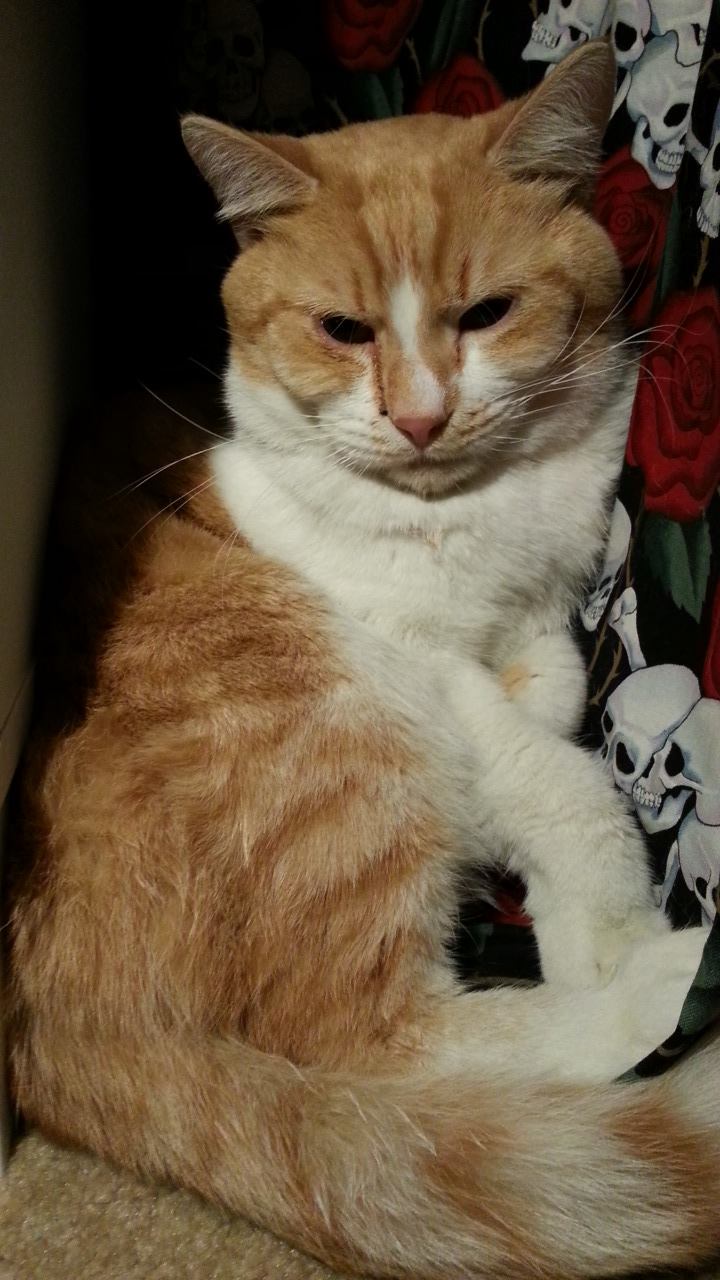 Over the weekend we acquired a kitten from PAAW – the Pet Adoptive Alternative in Warren. After Zeus died, I wasn’t sure we’d be a two-cat home again, but I knew Doug and Loki would let me know if and when they were ready for a new friend. I left it up to Doug, figuring he would be the main care-giver, to choose. I was just the Buyer of the Food.

Calls were made, information exchanged, and I was informed that Saturday was the designated meet and pickup date for our new friend. The location was a pet store in Southfield, and while I knew we’d be getting an orange and white cat, that was the extent of my knowledge. I asked Doug why he’d chosen this one. The webpage said his name was Armonii (*twitch*) and he was an urgent adopt. He was 8 months old, set fire to, generally abused and abandoned, and hadn’t found a home that would keep him longer than a few days or weeks. He’d been returned twice. He wasn’t a cuddlebug, and when people want a kitten they’re thinking of something they can dress in a frilly hat and nightgown and parade around the front yard in a pram. Armonii, aka Buddy, wasn’t any of those things. He was hurt and sad and needed a home. That was all Doug needed to hear and wanted to help.

The paperwork went smoothly, some organizations are easier than others, and he was released into our home under the bed that afternoon, where he hid for the entire day.

There would be no coaxing or cajoling. He was frightened and in a new home with weird smells and he had Loki The Bunny Death Bringer to deal with.

Yeah, Loki wasn’t thrilled with the New Guy either, and we had to have The Talk about what’s Acceptable Behavior. There had been some hissing and a little growling, but no fighting. Life with Loki is pretty much out of sight, out of mind and for the most part, the new addition didn’t seem to faze him.

We set out food and water under the bed, along with a new scratching post, and at the end of the day, bid all of our Little Men, seen and unseen, a good night at Lights out.

That’s when the fun started.

New Guy came from a home with nocturnal cats. I suppose all cats are nocturnal, but I don’t run with those tacky creatures.  The Stormer Household is Not Nocturnal. The Stormer Cats are not nocturnal.  Plus we’d just lost an hour to DST.

The New Guy didn’t care, so sleep became that that important phone call you’d been waiting for but kept missing.

At 4am, there was the sound of something large and heavy falling from something high. Our apartment isn’t cat proof because we’ve always had cats that couldn’t jump due to age or weight. My whole world has now been turned on its head. At the sound, Doug got up to investigate. From the living room I heard one-sided conversation and a little swearing so naturally I got up to see the damage.

I wish I could have gotten you a picture of the actual tableau but here is an establishing shot:

That there is a picture of our glassware shelves (from IKEA). It’s bolted into the wall. There is an Expedit TV center next to it just to give you an idea of height. On that top shelf sat Derby glasses from the 70’s and 80’s, our wedding champagne flutes received from the Las Vegas chapel, souvenir glasses from Germany, a beautiful cut glass decanter and sherry glasses from the Czech Republic (I think), and other various knick-knacks crammed up there just to the left of our Unity Candle.

Because cats are contortionists and inter-dimensional, The New Guy was also up there and he had wound himself around the decanter and derby glasses and champagne flutes, but managed to make that vertical jump without sending everything crashing to the floor. The thing that had actually broken was a delicate perfume bottle, and that had only fallen as far as the desk. We carefully removed glassware while standing on a stool and speaking quiet soothing words to Crazypants so we could pry him from the shelf to less breakable climes. I lost blood and skin, but I got him down. We then clipped his nails, something the Cat Lady said we COULDN’T EVER DO WITHOUT THE VET BECAUSE NO, but we’re bigger and have thick towels, so it was a manner of minutes to pare his deadly shanks. We set him free to hide again and went back to bed, but every few hours he reminded us he was still getting acclimated and lots of things were on the floor in the morning.

Sunday he spent mostly hiding, but came out a few times to see if it was all still a horrible dream before dashing back under the bed or behind the desks or under the buffet. I bought him a tunnel-type bed and a few catnip toys he could call his own, but I was happy to see that he and Doug were sort of bonding. New Guy spent time squeezing himself into every conceivable corner in his exploration of his new home, and Doug would get on the floor and pet with a finger and talk to him.

He’s only really active when we’re trying to sleep, usually between the hours of 2 and 5am, hopping on things, liberating items from the tops of nightstands, so that’s been a hoot. He’s been on the bed a few times, walking across Doug’s head, sticking his nose in my ear and breathing quick and heavy, like a teen obscene caller dialing from next door and he knows if you look out your kitchen window, you’ll see him. He has light steps, something I’d forgotten cats had since living with Baby Big Feet and and he’s chatty. There’s a lot of talking at night. I don’t know who he’s talking too and I don’t think it’s a pained or sad cry. It feels like a call of defiance to the Universe – “I’m here. I’m still alive. Throw what you want at me and I’ll survive!”

That’s what I think he’s saying. He’s a teen from a broken home, and we’re the new parents with the tough love policy that will turn this awkward Disney Movie into an awkward Lifetime movie and there have to be defiant speeches and some running away and hugs. Except he’s not chipped yet, so I’d like to avoid the running away part.

Loki is warming up to him and has been participating in the acclimation process by ratting out the New Guy’s hiding spot. Loki hasn’t had someone to groom or snuggle with since Zeus died. We all miss company and someone to look after.

It’s only Day 3 and we’ve got a whole life with this little guy. I hope he’s as happy as we’d like him to be.