Skip to content
Last night at the theater before walking into see WONDER WOMAN, I’m ordering drinks at the bar for me and my sister. A wee little man with something to prove (maybe that he was short and needed validation, I dunno) walks up. He asks about the Coco Banana. My sister holds up her drink and says it’s not too sweet. He tells the bartender (who’s still making my drink with two more pints on deck) to make him one. He picks up his popcorn and tells *me* “Order me one of those, I’m getting more popcorn.”
You already know what I’m thinking. 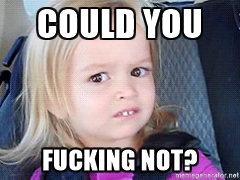 He walks away and I mutter, “What am I, your fucking maid?” My sister heard it, chick at the bar heard it, and for a few minutes we wondered aloud about the size of this guys balls and who exactly he thought he was. Ego? Entitlement? I mentioned that I should go ahead and order his drink, and then put our drinks on his tab. I am enthuisiastically encouraged by the women around me. We hunt for overinflated egos in cooperative packs.
I chose instead to “forget” his order and pay for just the two drinks. I’m gathering up my own popcorn, Icee, and the mixed beverage (Rocket, if you’re curious), when the wee little man wanders back. “There was something else I was supposed to be doing, but damned if I can remember what it is” I mutter (which I now realize isn’t as quiet as I think it is), and head into the theater. I didn’t look back, but I could hear the other woman at the bar laughing.
PRO TIP: When flirting conversationally, try not to make demands of women you don’t know. It’s not cute, it’s not “take charge,” and we’re all laughing at you.

By the way, if you’re on the fence about Wonder Woman (in theters June 2, 2017), check out my review over at FilmObsession.com, and then let me know what you thought of it.